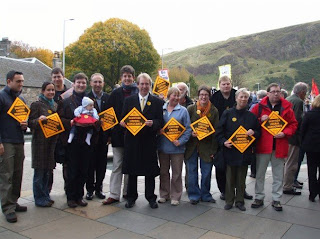 I would reckon a good 2-3000 people turned out on Saturday in Edinburgh to protest against trident. It was particularly interesting to see such a broad cross-section of Scottish Society in attendance. I certainly don't hold much in common with the Communist Party or any Churches bar being anti trident. It was no surprise that Labour & the Tories were the only political parties missing.
The photo of some of the Scottish Lib Dem contingent was taken by my pal Caron Lindsay. a rare treat for me to be in a photo rather than behind the camera.
Posted by Iain Rubie Dale at 14:03