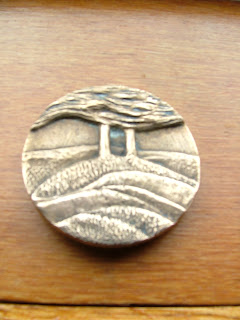 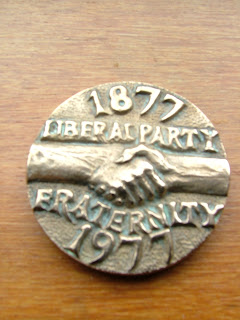 Around 15 months ago I purchased a piece of Liberal Party history on eBay, which is a Liberal Party centenary medal (stamped no. 32 of 500). Photos of the medal (badly taken by me) are shown above.
I would greatly appreciate some information about this item & would be really interested to hear from other others who are custodians of other medals such as this. Thanks.
Posted by Iain Rubie Dale at 21:59 No comments: 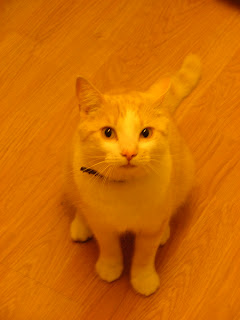 There's a young lady who lives across the street from me and she has designs on me!

Nothing untoward in that and Catherine should have limited worries as Felicity, as I've named her, is a smashing wee ginger and white moggy.

2. I'll be moving to Kinross-Shire within the next 12-18 months to set up shop with Catherine.

My dilemma: I really love cats and this wee lady is a beezer - she doesn't bother too much with the tidbits which I give her and goes into heavy purr mode by just kicking around the house with me. The folk who she already owns have, at least, one other cat and three weans.

Therefore I need assistance with the following questions:
i. If I let Felicity "own" me will I be causing hurt to the family already "owned" by her?
ii. Will Catherine accept her when they are both in the house or will there be a cat-fight (worst pun on this blog - ever!)
iii. What happens to my relationship with Felicity when I move to Kinross-Shire?

Answers on a postcard please.

The 25th "anniversary" of the Falklands war brought back home to me why I loathe, hate and despise the Tories and that auld witch Thatcher in particular. You see, it reminded me of what life was like under them in the early 1980's.

Hearing her voice, almost from beyond the grave, as she gloried in her decision to send hundreds of British service personnel to their needless deaths or wounds in the Falklands sent shudders up my spine and made me recall what life was like under her Premiership.

In 1980 I moved from Irvine to study at Teesside Polytechnic in Middlesborough. At first I behaved as any 19 year old would being away from home and off the leash for the first time. However, after a few months my eyes started to open and I realised what the "Thatcher Revolution" was doing to the area and the other areas of Britain which hadn't supported the Tories in the '79 general Election. If you worked in heavy industry, then tough, your jobs were going. If you lived in poor housing, then tough, the market should sort it out. if you believed in society and helping those around you, then tough as the Government didn't. If you were sick, old or unemployed, then tough because the Government would give you a pittance to survive on. If you believed in peace and nuclear disarmament, then tough, because they were going to spend billions on nuclear weapons and yet pay squaddies a pittance. If you were against us, then tough, as you were the "enemy within" and would be treated as such.

Thatcher and her cronies are the reason why we now have an avaricious, selfish, society in which too many people are only concerned about me, me, me and don't give a damn about their fellow citizens, their communities or our society.

Andrew Marr said on TV the other night that "we are all Thatcher's children". That may well be true but I am proud to be one of the rebellious ones.
Posted by Iain Rubie Dale at 00:24 3 comments:

Yes it was foodie heaven

As intimated in my last post, I attended the Channel 4 organised "Taste of Edinburgh" event at the weekend. Catherine decided it wasn't her idea of a good day out so the party consisted of her Dad, younger Sister and myself.

The entry fee of £25 seemed quite steep but it did include £15 worth of tokens to spend in the restuarants, bars & retail stalls and actually proved to be reasonably good value for money. Some 15 Edinburgh restaurants participated, each of which offered 3 taster dishes from their menus. I won't rant on about the whole panopoly but shall say that it is my intention to visit two particular restuarants in the shortest order. these are Suruchi & Iggys. I just hope that the full experience lives up to the taster menus and ambience they created.

Hopefully this will be an annual event and that the organisers can expand to hold a similar event in Glasgow each year.

I'm through in Perth again this weekend as Catherine has a meeting from 10 o'clock until the back of four - yep, Soroptimists again.

Whilst she's stuck in her meeting her Dad & I are planning to pay a visit to Edinburgh to visit Channel 4's "Taste of Edinburgh" event which is being held in The Meadows from the 7th - 10th of this month.

There are three different entry levels and I'm planning on doing the £25 one which gets you in and also gives you 30 "crowns" to spend on grub and booze. There are 15 "prestigious" chefs creating "signature dishes" for tasting, a beer masterclass, wine tasting, chef demonstrations - including Martin Wishart, live music and 80, count em, 80 specialist food and drink stalls. Truly a heavean for us foodies or pseudo-foodies. Yummy!

www.channel4.com/tastefestivals
Posted by Iain Rubie Dale at 23:02 No comments:

Soroptimists are off the hook

In a previous post I railed against Catherine's Glasgow Soroptimist Conference depriving me of her active participation in most of my Birthday this year and also meaning we would not be able to get away for our usual early August break.

I'm delighted to be able to recant and inform that either Catherine or her Mum had got the dates wrong. Catherine blames her Mum for this but I have my doubts!

Anyway, it means that I get the pleasure of her company for all of my birthday and we also get 4 days in Dublin, a city neither of us have been to before, which we both eagerly await visiting.
Probably also means that I won't get her to buy me dinner at Rogano's to assuage her guilt.

I will have to work out our carbon offset for a return flight from Prestwick (Rabbie Burns International as it should be called - see rants in previous posts!) to Dublin. Any suggestions as to where I can work this out would be appreciated.

www.soroptimistinternational.org
Posted by Iain Rubie Dale at 22:08 No comments:

Bryson at his best

I bought Bill Bryson's "Life & Times of the Thunderbolt Kid" a few days back, which is the story of his childhood in Des Moines. Having enjoyed all of his previous books I thought that it would be a good read. Well I certainly wasn't let down. It's absolutely side-splittingly hilarious and in certain parts had my crying with laughter. Indeed from time to time I had to stop reading it as I was hurting too much from laughing.

It is recently published in paperback by Black Swan and it's RRP is £7.99.

www.billbryson.co.uk
Posted by Iain Rubie Dale at 21:56 No comments: