Now I know why the chicken crossed the road! 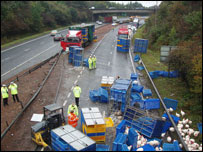 Chicken lorry crash causes chaos
"Much of central Scotland was brought to a standstill after a lorry containing 3,000 chickens crashed on the A80, resulting in birds running loose.
The lorry jack-knifed on the southbound carriageway, near Haggs, at 0430 BST, leaving the 45-year-old driver with serious back injuries.
On and off ramps were shut causing huge tailbacks across the Forth Valley.
About 400 birds died and the rest have now been caught. It is hoped the M80 and M876 will reopen at about 1300 BST.
Drivers were asked to use an alternative route via the B816 through Bonnybridge/Allandale and rejoining the A80 at Castlecary.

Ch Insp Donald McMillan said: "Around 3,000 chickens were being carried and were shed on to the road."We are working with various organisations to have the road reopened as quickly as possible."
The road closure caused widespread disruption for motorists travelling to Perth, Stirling, Dundee, Glasgow and Edinburgh, with severe tailbacks on the M9 northbound Kinnaird to Pirnhall route.
Vets were at the scene, along with a specialist team from Noble Foods in Glenrothes which was helping to catch the birds. It is understood the birds will be taken to the company's hen processing plant in Gainsborough.
Motorist Tony Collins, from Cumbernauld, said: "There are boxes all over the carriageway and there were still a few chickens running around the embankment."
The Scottish SPCA said it was concerned for the welfare of the chickens.
Spokeswoman Doreen Graham said many of them could be in shock and may die.
Central Scotland Police appealed to motorists on the north bound carriageway not to slow down to watch the recovery operation and to refrain from taking photographs while driving.
The police added that they would like to remind drivers that using a mobile phone while driving is illegal. "

I really should not laugh especially because of the poor chooks and delayed drivers but somehow there is something really, really amusing about this story. Was fowl play involved?
The photograph above is BBC Copyright as is the text of the article.
Posted by Iain Rubie Dale at 13:05