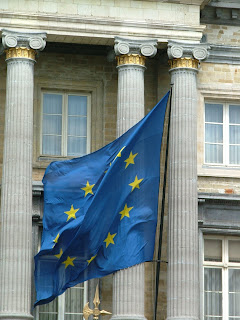 The European Parliament voted in Plenary Session today adopting the Lamassoure-Severin report on future numbers of MEPs for EU member states. This will mean that the number of UK MEPs will fall from the current 78 to 73, which has worrying implications for the number of Scottish MEPs. We currently have 7, including my employer Elspeth Attwooll. It is possible, depending on the PM, that this will fall to 6.

If our numbers reduce to 6 then, in my opinion, will give the Gnats an open goal against the Federal & Unionist parties in Scotland. Why? Well Malta (Pop. 400k), Luxembourg (Pop. 460k), Cyprus (Pop. 766k) & Estonia (Pop. 1.3m) will all also have 6 MEPs. In addition; Slovenia (Pop. 2m) will have 8, Lativia (Pop. 2.3m) 9, Lithuania (Pop. 3.4m) 12 and Eire (Pop. 4.2m) will also have 12. The Gnats will surely argue that Scotland, with a population of just under 5m, would be confident of having, at least 12 MEPs if we were "Independent in Europe". They will then use this as a club to beat us Lib Dems, New Labour and the Tories for opposing their loony tunes plans to have the UK broken up. Worrying. However there are quite a few stumbling blocks before this happens so there may be a ray or two of sunshine for us yet.