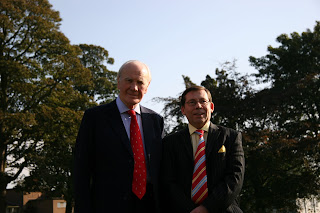 Here's what I posted on LibDem Voice at 4.29pm yesterday:

"I don’t think Lady Elspeth will let him stand down.

Seriously though, I’ve got really mixed feelings on this one. I didn’t vote for him, actually that’s not true, I gave him my 3rd preference primaraly becuase I was furious that all of our Scottish MP’s (excepting Charles of course) came out en-masse as Ming supporters. I strongly believe that it’s wrong for MPs to try and bounce the membership like that. Also believed that the candidate I was supporting was a much better choice for the job. Ming was brilliant at Foreign Affairs and should have stayed there.

However, he was elected, and if I can put up with that our MPs must also put up with it, ceasing their off-the-record briefings to the media and ill chosen words in public. Were Ming to voluntarily choose to stand down then I would feel that he had made a principled decision and would support that choice."

Never for a moment did I think it would come true just so soon! In the end Ming went quickly and with the typical dignity which he always displays. I trust that whoever succeeds him will have the wisdom to talk him into returning to the Foreign affairs brief in which he has always excelled.
Posted by Iain Rubie Dale at 11:47