A week is a long time in blogging 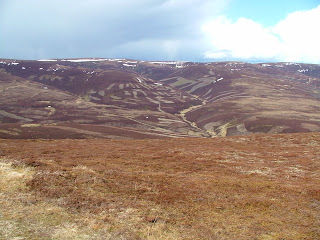 Blogging hiatus for the last week as I've been up in Aberdeenshire with the boss and relaxing over the bank holiday weekend so have been away from the net for much of that time. (The photo is of part of the 17,000 acre estate we visited)

Whats happened since I last blogged? Well there has been a round of local elections in England & Wales where Labour got absolutely trashed by the electorate across the board, Tories had a fantastic night and we had a better than expected night ending up with a net gain of 30 odd seats - personally I'd been expecting a loss of anywhere up to 100. Londoners have shown themselves to be political plonkers by electing Boris "blethering idiot" Johnstone as their Mayor and putting a fascist scumbag into their Londim Assembly in the shape of a BNP member. Ken wasn't worthy of re-election but I was very disappointed that the stand out best candidate, Brian Paddick, came 3rd.

On the fitba front Rangers made it to the UEFA cup final in Manchester whilst Manchester United and Chelsea made it to the Champions League final in Moscow - wonder if Abramovich manages to turn up to that one? sadly Irvine Meadow lost two nil away to Pollock which put our title hopes in serious jeopardy :(

Up here in Scotland wee Wendy has done a scorching U-turn on the question of an independence question in a constitutional referendum. Time for our Scottish Lib Dem leader Nicol Stephen to also have a change in heart methinks. It is well worth remembering that our Scottish Conference has not debated this position and that the Leader announced the policy off his own bat during last year's election campaign. Methinks I feel a conference motion coming on.

Other news: a crane collapsed at the BAE systems shipyard in Govan this morning causing damage but fortunately no serious casualties; A typhoon in Burma has killed thousand and made hundreds of thousands more homeless, thankfully however, the Junta has said that it will accept assistance from international aid organisations; It would seem that our "Big Brother" state of millions of CCTV cameras has failed to cut crime - no surprise there then. Obama and Clinto are still going head-to-head in Indiana and North Carolina - go Barack go!

Finally the Labour whips in the Commons have failed to suitably honour the memory of Gwyneth Dunwoody MP, the recently deceased member for Crewe & Nantwich, by calling the by-election even before her funeral. Very, very distasteful sharp practice.

Yes, Ian, dead right. Get Nicol to follow Wendy's lead. Show us all that the Lib Dems are well and truly Labour's poodles. Or did they both have this "change of heart" on the same day? What a coincidence!

Dear me. Perhaps I would have more empathy if you had managed the basic politeness of spelling my name correctly. Obviously you did not understand what I actually said in the post - I argued, as I have argued since Nicol 1st chose to the position that we would not even talk about coalition if an independence referendum was to be held, that he was wrong to take that position. I subsequently argued, a position I have also held for over a year, that we should have a referendum and lance the Gnats boil for a generation when they lose as they surely will do.

As regards to your false assertion that we are "truly labour poodles", quite frankly it's bollocks and you know it. Which of the two coalition partners got more of their manifesto through parliament in both terms of coalition? Here's a hint - it wasn't Labour.

I really dislike people hiding behind the mask of anonymity.

Well, as the vote will end up with a "yes", I am delighted that you and Wendy are both up for bringing it on - even if your reasons have nothing to do with the future of our country. You both just want your parties to do a little bit better at the polls. oh well, roll on victory and thanks IAIN for all your help.

"even if your reasons have nothing to do with the future of our country."
That sort of offensive comment is typical of certain sections of Gnat support - scratch them a bit and it comes shining through that because they support independence they arrogantly consider themselves to be better Scots than the rest of us.

Let me tell you something for free, I am a proud patriotic Scot who simply believes that independence is not needed - I strongly believe in a FEDERAL UK with much greater powers for the Scottish Parliament, a body which would not exist if it were not for the Scottish Liberal Democrats. I seem to remember the Gnats didn't participate in he Constitutional Convention.

No more anonymous comments thank you, leave a name or don't bother commenting.